A series of videos that celebrate the women of Northwest Ohio who have made substantial contributions to civic and social improvement.  Women of Northwest Ohio Spotlights are made possible in part by a gift provided by Dr. Douglas and Suzanne Neckers. To listen to additional spotlights, visit our podcast page here. 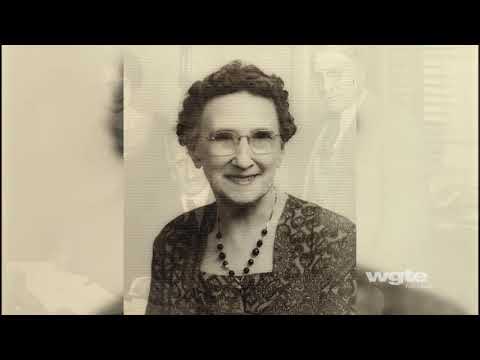 The child of pioneer homesteaders Myna Reece Hanna attended Oberlin College and moved to Wood County in 1895 to teach in Liberty Township.  After operating a general store with her husband for 23 years, she moved to Bowling Green, Ohio and later she was elected to the Ohio General Assembly where she proudly served for two terms. 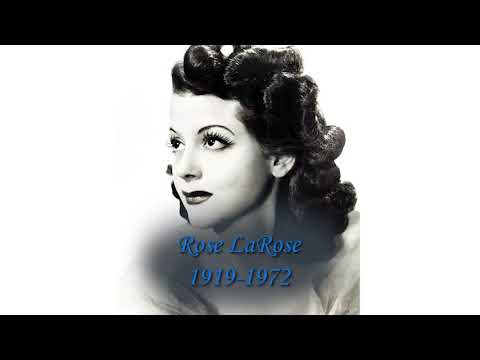 Christened Rose LaRose by a sign painter, Rose DePella adopted the name and became a nationally known Burlesque Queen through the 1940’s and 50’s.  After retiring from burlesque in 1958 Rose became a shrewd and controversial business woman in Toledo. 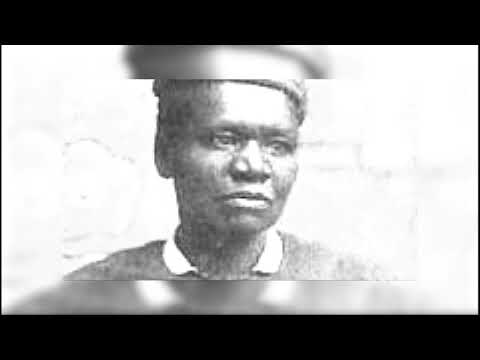 Born a slave in 1832, Mary Fields was one of the most colorful, respected, and beloved of pioneer women, and she was an integral part of the history and formation of Toledo’s Ursuline Convent.  She later became a western legend as “Stagecoach Mary”, one of the first women in this country to deliver the U.S. mail. 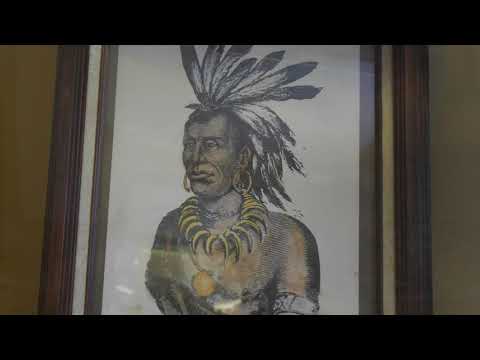 Mary was the youngest child of Captain William Wells and Sweet Breeze Wells, daughter of Little Turtle, leader of the Miami Indians.  She grew up and married James Wolcott and together they oversaw the construction of their home in Maumee, which is now known as the Wolcott House.  The Wolcott House is the only known museum with a direct Native American Lineage. 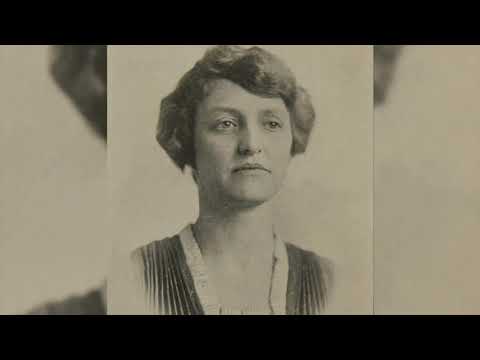 Mary Willing’s father recognized his daughter’s musical talent early in her life and encouraged her to pursue it.  She made her piano debut at Toledo Memorial Hall at age 16, and by 18 was the organist at St Mark’s Episcopal Church.  She taught privately, and for 12 years was the head of the music department at Smead School for girls.  In 1919 she was chosen as Director of the newly reorganize the Toledo Choral Society. 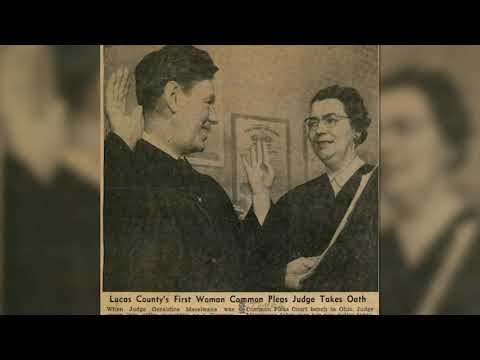 Judge Geraldine Macelwane was born in Detroit and moved to Toledo with her parents in 1924.  She graduated from Central Catholic High School and the next day she began full-time employment as a Railroad freight clerk and started law school.  She was admitted to the bar in 1932 and eventually became the first woman elected to the Toledo Municipal Court bench. 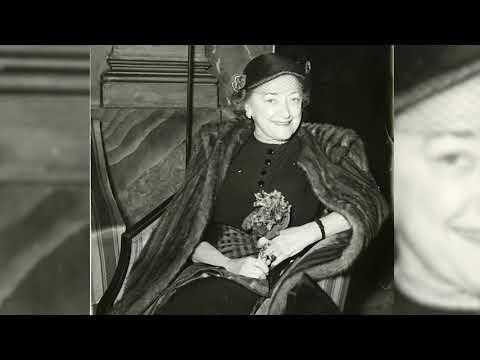 Margot Sanger returned to Toledo after a year of college to teach the story telling method at a kindergarten training school, and teach French at the University of Toledo.  In the 1920’s she began an entertainment career as a mono dramatic artist.  By 1932 she began her professional career in New York City. 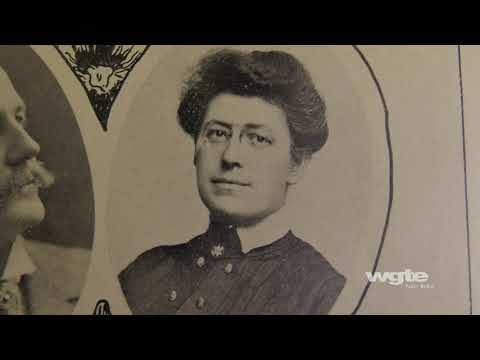 The first women to elected to any public office in Toledo was Pauline Steinem, Gloria Steinem’s grandmother.  She arrived in Toledo in 1884 at age twenty-four.  She was a supporter of Samuel “Golden Rule “ Jones and his efforts to introduce honest government.  Jones convinced Pauline to run for the Toledo Board of Education, and she was successful in 1904. 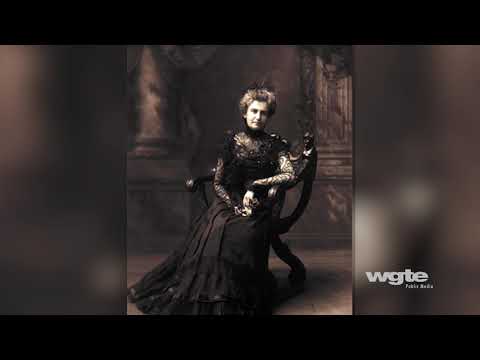 Florence Libbey was a staunch supporter of the early Toledo Museum of Art, even donating the funds to build the Born into one of Toledo’s most socially prominent families and marrying John Drummond Libbey at age 28, Florence Libbey was well educated and traveled extensively.  She appreciated and was a collector of ceramic and oriental art.  Because of her love of art, the emerging Toledo Museum of Art became the couple’s focus and benefitted greatly from their endowments.Peristyle. 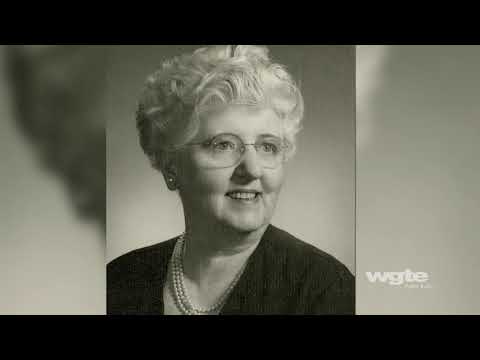 Mary Mewborn Gillham was born in Altanta, Georgia in 1899.  She eventually moved to Toledo and graduated from Scott High School in 1919 and earned her BA and Masters from the University of Toledo all while starting work as the university’s Assistant Librarian in 1921 and being promoted to University Librarian in January of 1922, a position she served at for 47 years.  She even designed the plans for what is now Gillham Hall, a building named for her. 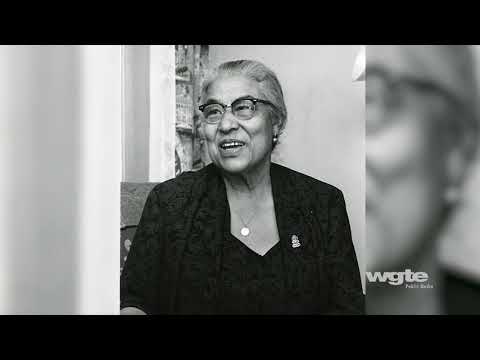 Ella P. Stewart became the nation’s first Black female pharmacist when she earned her degree from the University of Pittsburgh in 1916.  Along with her husband William she opened a pharmacy at 566 Indiana Avenue in Toledo to serve all members of the public. 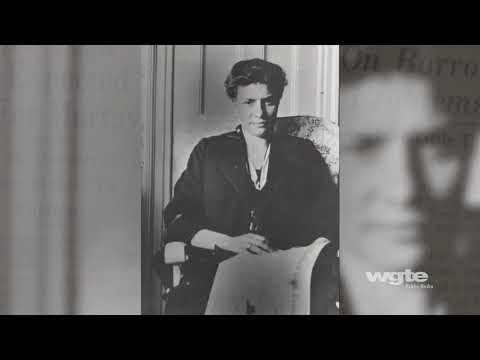 In 1948 at age 75, Olive Colton was named woman of the year by the Toledo Times Newspaper.  Olive was one of the first women to vote in 1896 when Ohio only allowed women to vote for school board candidates. 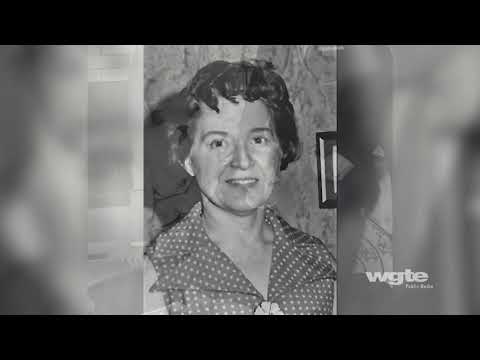 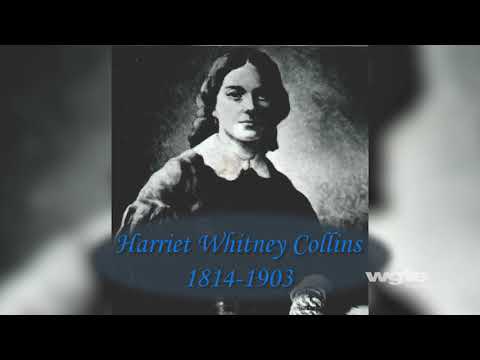 She was Toledo’s first woman school teacher and taught in a one room, log building on the banks of Mud Creek, the site now occupied by the Toledo Lucas County Public Library.  In 1941 Toledo dedicated the Harriet Whitney Vocational High School for Girls, the only Toledo Public high school named for a woman. 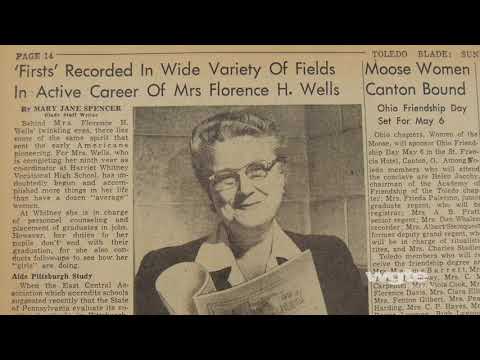 Born in Archbold, Ohio Florence Hartman earned her law degree from the University of Toledo in 1923.  She was admitted to the bar while serving as deputy clerk of the Toledo Municipal Court.  She was also the first woman in Ohio elected to both branches of the state Legislature. 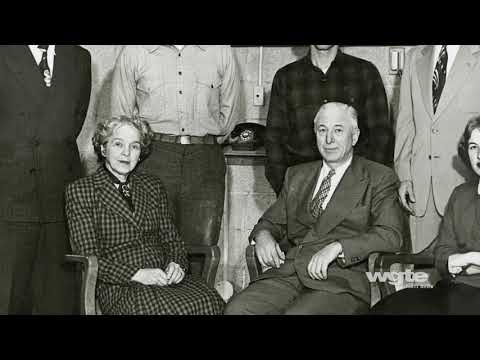 In 1915 Margaret Anderson was a member of the first graduating class of the Bowling Green Normal School, now Bowling Green State University.  She taught elementary grades at Jefferson School in Toledo before marrying and taking time off to raise her family.  Once all her children were in school she returned to teaching for 16 years as a volunteer at Merrybrook Academy, a school for court assigned pre-delinquent girls. 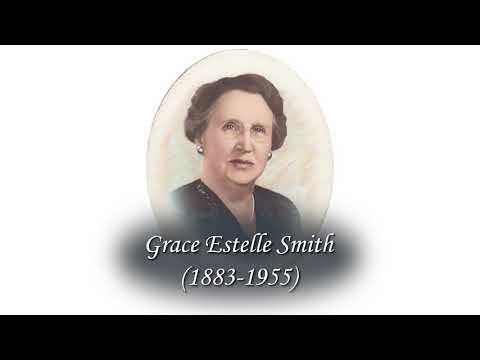 After becoming the YWCA restaurant manager, Grace Smith was encouraged to open the famous and fondly remembered Smith’s Cafeteria in 1916.  Being a new concept for Americans, Grace developed standardized recipes, so that food tasted the same week-to-week and at all of her cafeterias. She and a sister were founding members of the Ohio Restaurant Association, and Grace served as vice president of the National Restaurant Association. 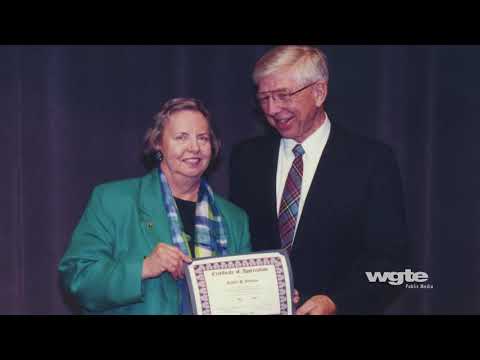 As a former classroom teacher and teaching fellow at Bowling Green State University, it was the potential of public broadcasting to educate that led Shirley Timonere to WGTE.  Recognized nationally as a force in educational television, it was Shirley's idea to bring Mister Rogers' Neighborhood and other educational programs into childcare settings and to train caregivers in how to use the programs.  Shirley Timonere retired as president and general manager of WGTE public broadcasting in 2002. 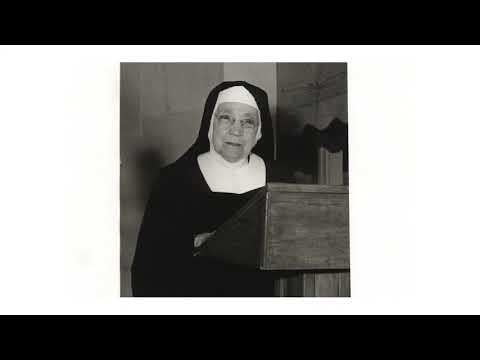 Sister Adelaide, the third child of Polish immigrants, took her vows in 1902.  During a time when few women went to college, she earned a master's degree from Columbia University.  In 1916, responding to an urgent request from the Diocese of Toledo for teachers, she was installed as the first Provincial Superior.  A Sylvania farm was chosen for the convent and Mother Adelaide turned the property into a park and planted one thousand evergreens. 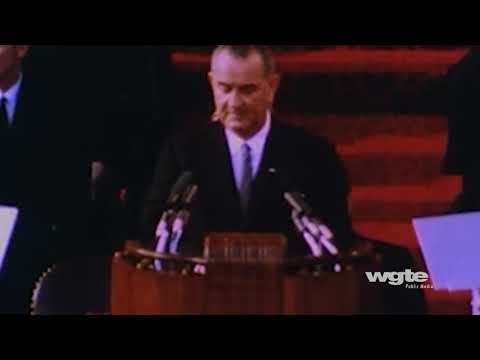 A graduate of  the Toledo Conservatory of Music with a master's degree from New York University, Cecile Vashaw served as second concertmaster of the Toledo Symphony Orchestra, and also taught, conducted and supervised the Toledo Public Schools' string program. In 1950, she founded the Toledo Youth Orchestra, which she directed for the next 15 years, until her new responsibilities as director of music for the entire Toledo Public School system forced her to step away. 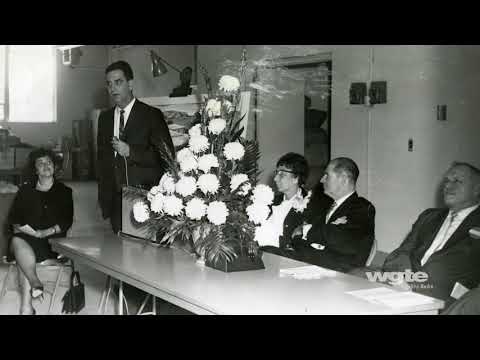 Josina Lott was a crusader who believed in education for all children, not just the able bodied. Her pilot program was simple: teach a child with cerebral palsy the basic curriculum of first grade. There was no school for that child in 1938, so the child and her mother came to Josina's apartment for lessons. By the end of the year, the student could read, write and do simple addition. By the time she retired there were four schools and the workshop serving 800 young people. 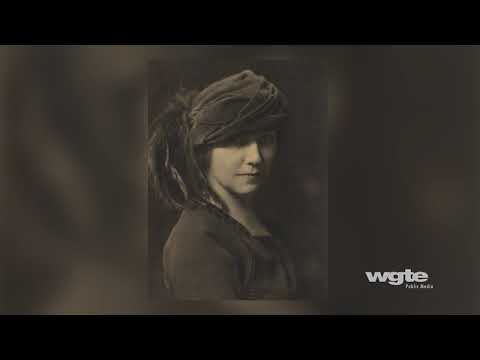 While visiting Toledo relatives, Nina Spaulding met George Stevens. Together they helped create, design and promote building the Toledo Museum of Art. She was also founder of the museum's first school of design and taught sketching and art history. Together with other prominent Toledo women, Nina was instrumental in forming several Girl Scout troops and received the first official charter for a Girl Scout Council in the United States in 1917, with Nina as the first president. 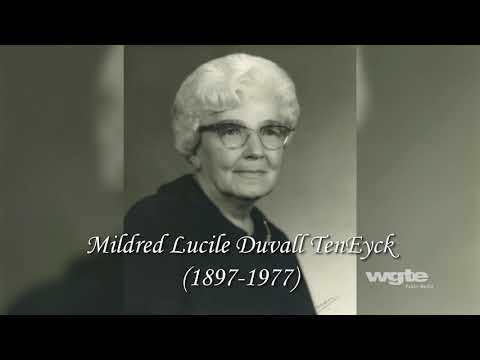 As a teenager, Mildred wanted to be a missionary. She was member of the first graduating class of Waite High School and earned a teaching certificate from Bowling Green Normal College. In 1948, Mildred was elected to the Oregon Board of Education and served 12 years. She also volunteered with the Red Cross, and in 1957 organized the Oregon-Jerusalem Blood Bank program. Her interest in housing for the elderly led to her appointment in 1966 to the Toledo Metropolitan Housing Authority. 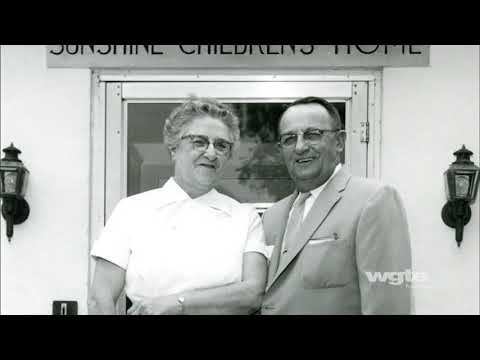 Georgette Engler, who was a nurse, worked to establish a home to serve children, like her own, with developmental disabilities. Sunshine Children’s home was licensed in 1952 as a privately operated group boarding home for 20 children. The children’s ages ranged from two weeks to 13 years, and they came from all across the United States. The Toledo Building Trade Unions twice donated their time, material and labor to expand the home. In 1960, with nearly 100 residents, administration and ownership of the home was turned over to the Mennonite Health Services Alliance, to ensure that the Englers’ mission would be carried forward.